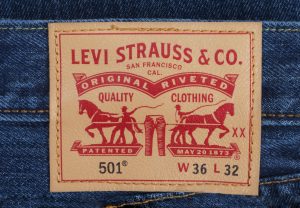 Jeans are always in fashion, and vintage ones can be worth a lot of money. A pair of 125-year-old Levi Strauss & Co. blue jeans recently sold at auction in Maine for nearly $100,000 US.

An anonymous bidder from Southeast Asia bought the pants, which failed to sell at auction in 2016. The sale was nearly a record for old Levi’s. What type of person would spend that kind of money on fashion?

Because it was a private sale, Soules was unable to reveal the exact price of the jeans or where the buyer lives. A representative for the buyer travelled to Maine to inspect the merchandise before purchasing them on May 15.

The jeans have a somewhat interesting story attached to them. Storekeeper Solomon Warner from the Arizona Territory purchased them in 1893. Described as a “colourful character,” Warner was shot by Apache Indians in 1870. He was one of the first Americans to sell dry goods in Tucson.

A mill in New Hampshire produced the denim, and Levi’s in San Francisco, Calif., manufactured the jeans, which are button fly. During that time, jeans only had a single back pocket. Men wore suspenders, so there are no belt loops on the jeans.

Warner was apparently a big guy. The jeans are size 44 waist with a 36-inch inseam. He only wore them a few times because he got sick, said Soules. They were stored for decades in a trunk and were in extremely good condition prior to the sale.

Soules initially put the jeans up for auction two years ago, but it was cancelled due to a computer issue that caused problems with online bidding. The seller decided to do a private sale instead.

Rare jeans are popular at auction, according to Soules. A Japanese collector bought a pair of 501 jeans from the 1880s for $60,000. Still another pair from 1888 sold for six figures.

The positive public relations related to the sale must be a welcome relief to the company. Earlier in May, the environmental activist group Stand.earth released the critical report “Too Deadly To Wear: Levi’s Pollution, the Booming Fashion Industry and Its Role in Deaths from Air Pollution and Climate Change.” The report claims Levi’s plants pollute as much as 1.1 million cars annually.

“The fashion industry is the source of approximately 8 percent of global climate pollution. If it were a nation, it would be the fourth largest climate polluter on Earth,” said Todd Paglia, executive director of Stand.earth in a statement. “Yet major brands like Levi’s continue to drag their feet on comprehensive climate action, ignoring the massive amount of pollution hiding in their supply chain.”

A Levi Strauss spokesperson responded in a statement:

“Levi Strauss & Co. has a long-standing commitment to taking action on climate change. In line with our history of advocacy, we’ve been vocal in our support for the Paris Climate Agreement and in urging world leaders to protect our environment. We’re committed to reducing our emissions by 25 percent and using 20 percent renewable energy by 2020 – and we are on track to exceeding this goal. We also partner with organizations such as the National Resources Defense Council and the International Finance Corporation on innovative and scalable approaches to reduce factory emissions across the global supply chain. In September 2017, we joined more than 300 global companies in committing to set science-based targets to reduce emissions across our entire supply chain.”