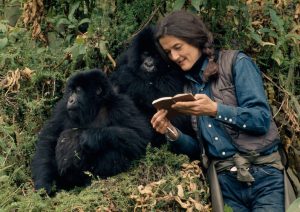 Dian Fossey produced unparalleled research about mountain gorillas during the 18 years she spent studying them in the mountain forests of Rwanda. It’s been 32 years since her brutal murder, and National Geographic is detailing the life and legacy of the legendary primatologist in a three-part miniseries airing in December.

“Dian Fossey: Secrets in The Mist” includes Fossey’s observations and writings and demonstrates how her love for gorillas prompted her to devote her life to their preservation. Her drive to protect them likely caused her untimely death in 1985. Yet, there are still so many questions about her murder.

“Secrets in The Mist” delves into Fossey’s death and the conviction of Wayne McGuire, a doctoral student who worked with Fossey in Rwanda. Following her murder, Maguire returned to the United States where there was no extradition agreement between the two countries. He was found guilty in absentia by Rwanda courts. 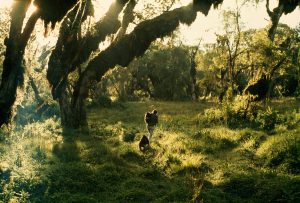 McGuire has long maintained his innocence, and many with intimate knowledge of Fossey’s fate are skeptical about his role in the crime. McGuire gives a rare interview to National Geographic, prompting even more questions about his role in her murder. Producers were also given access to objects from the scene of the crime as well as Fossey’s personal affects.

Ironically, Fossey, who was 52 when she passed away, mused about life and death in the final entry of her journal. She wrote: “When you realize the value of all life, you dwell less on what is past and concentrate more on the preservation of the future.”

Sigourney Weaver, who portrayed Fossey in the 1988 Academy Award-nominated film “Gorillas in the Mist,” collaborated on the miniseries. Director, producer, and writer James Marsh (“Man on a Wire,” “Theory of Everything”) is executive producer.