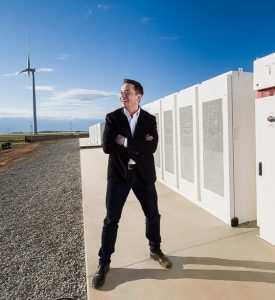 Billionaire and inventor Elon Musk announced on Friday that he’s determined to send cargo ships to Mars by 2022 and a colony of people to the planet by 2024. A smaller version of the interplanetary transport system, which Musk has dubbed BFR (Big F- -king Rocket), would be used to boost travel on Earth and help pay for the Mars mission.

SpaceX has already started working on the project, and the company expects to start building the first ship in the next six to nine months. Musk is “fairly confident” that the ship will be complete and ready to launch in approximately five years.

He hopes to send two cargo ships to Mars by 2022 with the goal of locating a water source. Rockets would drop off equipment and life-support systems on the planet to enable future colonizers to live there. In 2024, four ships would bring people and supplies to Mars for habitation. The BFR will hold about 100 passengers and include 40 cabins as well as communal spaces. The voyage is expected to take three to six months, but that’s open to debate.

Musk also revealed plans for developing rockets that will transport people between Earth’s largest cities in just minutes. For example, a trip from New York City to Shanghai would take less than 40 minutes. The flight currently takes passengers 15 hours. This system, in turn, would help pay for future missions to Mars.

Musk told audience members at a global space conference in Adelaide, Australia: “The most important thing… is that I think we have figured out how to pay for (BFR), which is to have a smaller vehicle, it’s still pretty big, but one that can… do everything that’s needed in the greater Earth orbit activity.”

He explained how it would feel to travel from city to city by rocket: “Once you are out of the atmosphere, it would be as smooth as silk, no turbulence, nothing.”

It would also take a fraction of the time it takes to travel by plane. He noted: “There’s no weather… and you can get to most long-distance places in less than half-an-hour. If we are building this thing to go to the Moon and Mars, then why not go to other places on Earth as well.”

Musk plans on funding the missions by using the BFR for several functions, including launching satellites and servicing the International Space Station for NASA. That will allow SpaceX to focus on one spacecraft to perform various tasks instead of several.

He did not disclose how much money would be spent on developing the rocket or the price of the tickets to ride it. Last year, Musk described a rocket system that would cost $200,000 per ticket.

SpaceX has successfully launched 13 missions this year so far, more than any of its rivals. Musk’s plans to colonize Mars are ambitious, and many are skeptical that he will be able to follow through with the timeline he’s proposed.