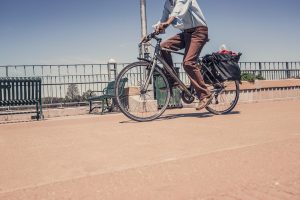 The League of American Bicyclists notes that 40 percent of all trips in the United States are less than two miles, and cycling is a fun and easy way to run errands and go to the office. Bicycle commuting in the United States is on the rise. In bicycle-friendly communities, commuting rates increased 105 percent from 2000 to 2013, much larger than the national average of 62 percent.

Bike to Work Day is May 19, and a new study shows why you should opt for two wheels instead of four when commuting around town. Research by the University of Glasgow published in the British Medical Journal (BMJ) reveals that cycle commuting is associated with a much lower risk of cardiovascular disease (CVD), cancer and any cause of death.

In general, individuals worldwide are exercising less, in part because fewer people are walking and cycling to work.

The five-year study examined more than 250,000 U.K.-based commuters, with the average age of 52, and found that those who ride their bikes to work have a 45 percent lower chance of developing cancer and a 46 percent lower chance of getting heart disease. During the study, 37 people died; however, 63 would have died had they opted to use a car or public transportation to commute, according to researchers.

One of the study’s authors, Dr. Carlos Celis-Morales from the University of Glasgow, told the Telegraph: “This may be because walkers commuted shorter distances than cyclists, typically six miles per week, compared with 30 miles per week, and walking is generally a lower intensity of exercise than cycling.”

According to the World Health Organization, 30 to 50 percent of cancers could be prevented by several factors, which includes regular exercise such as cycling. In 2015, 8.8 million people died of cancer.

Why cycling is so beneficial

There are many reasons why cycling is so good for your health. According to Harvard Medical School, it’s easy on your joints because you put your weight on the bones in the pelvis instead of on your legs. Bicycling is also an aerobic exercise, which benefits the heart, brain and blood vessels.

Cycling is also great for muscles. Pedaling works the buttocks, thighs, hamstrings and calves as well as the flexor muscles in the hips. In addition, the abdomen works to keep you balanced and stay upright while the arms and shoulders help steer.

People who use bicycles are better equipped for walking, standing and stair climbing, and they have better balance and endurance. The act of pushing pedals also increases bone density.

For those interested in bicycle commuting, several factors should be taken into account. First, be careful if you have heart disease, arthritis, thinning bones or a recent fracture. Talk to a doctor before getting on two wheels.

Also, make sure your bicycle is in good working condition and that the seat is the correct height so you don’t fall off. Wear a helmet, try to use bike paths instead of the street when possible, and carry plenty of water to stay hydrated.

The League of American Bicyclists established Bike to Work Day in 1956, and communities across the United States organize big events to coincide with the May 19 event. In Washington, D.C., Maryland and Virginia alone, more than 85 pit stop events will be held throughout the day. Free commuter convoys will also be scheduled for those who want to bike to work with others. 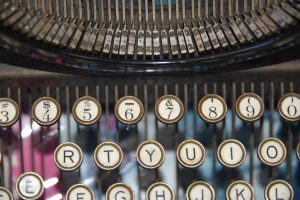 Hello, all. Check out some of my writing samples by clicking on the links above or scrolling down…